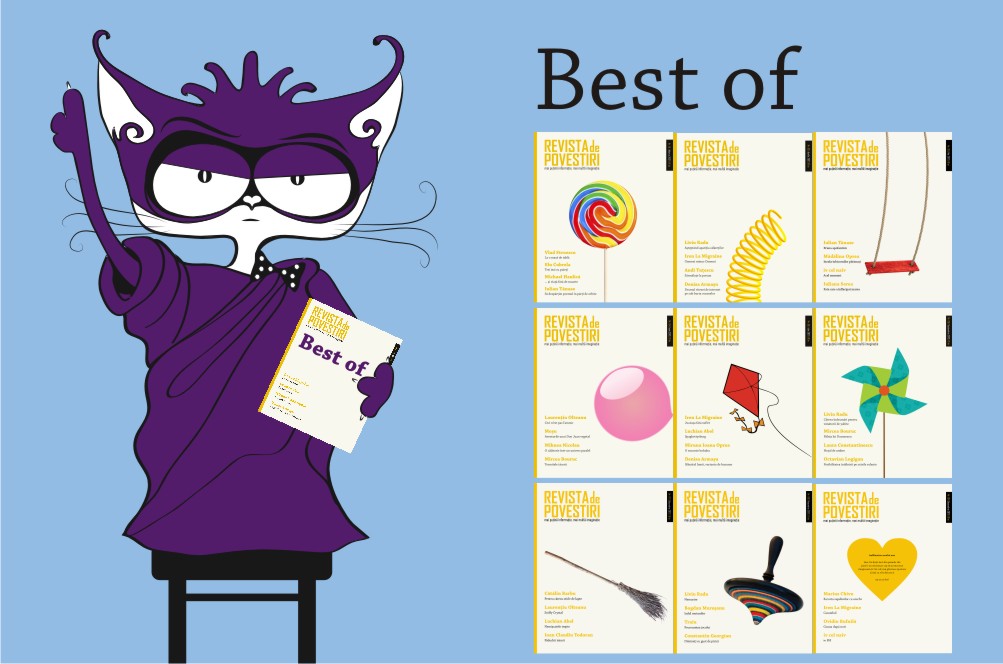 What is Revista de Povestiri

Revista de Povestiri promotes imaginative writing. It encourages writing by making available a publishing space for short stories received from the readers, and giving the chance to become permanent contributors to those who fit the concept of the magazine.

We publish only fiction stories; each literary text has maximum three pages. All the creations that one can read in the publication tell a story, be it through the genre of the prose, poem, image or otherwise. The central concept of the magazine is imagination: we bring out imaginative short stories written by talented Romanian authors, be it debutantes or experienced writers.

As for Motanov, he is a purple cat which lives in the magazine – he shows up as an illustration in each number, and edits the texts received from the readers; he also is an imagination coach on Facebook since January 2012.

Revista de Povestiri was launched in March 2012, and is published on a monthly basis, except for August and January, in both printed and digital formats; it has a national range of distribution and 1000 – 1500 copies per issue. It has 48 pages, a simple and playful design, and a rather small format, in order to make it easy for one to carry it around.

How can you read it in English

With your help, we want to publish a selection of all the texts which have been published in the 2012’s issues of Revista de Povestiri (March – December). We will choose the best texts and will translate them, with the help of experienced translators. This Best Of edition will have 100 pages and 1000 copies.

We want to publish the Best Of issue in the spring of 2013.

Contemporary Romanian literature deserves to be accessible to a broader, international audience.

How can you support us

We launched a campaign on the first crowdfunding website in Romania, help us publish the anthology by making a donation here :)